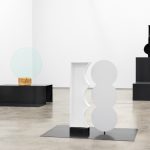 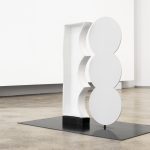 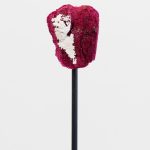 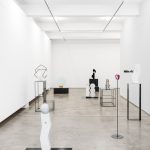 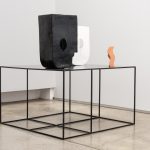 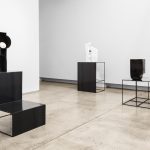 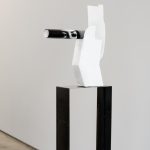 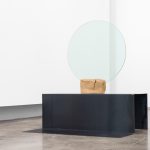 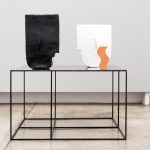 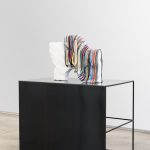 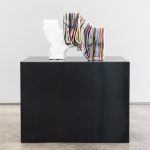 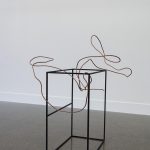 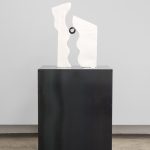 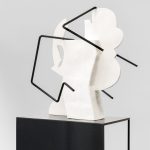 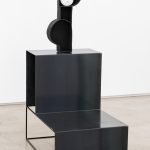 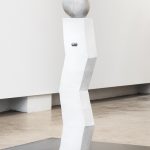 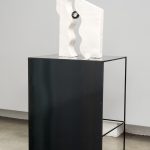 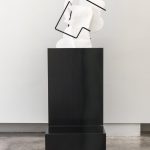 “The works in Leftovers are gestures—odes—to artists she has known personally or admired from a distance. Artists who have influenced her or shaped her practice and/or thinking.

In this body of work Mestrom has reached out to a myriad of artists—cap in hand—to ask if they might be able to offer some scrap from their studio floor. She soon realised that it was the provenance of the ‘leftover’ that was significant. These weren’t just any old scraps; they were a material record of an artist’s editing process. By being selected, each remnant was immediately unrejected, imbued with new value. They became great again—full of potential—picked up off the floor as ‘nothing’ and handed over as ‘something’. It is these arbitrary fragments that have become the templates for her new sculptures, further extend the ways in which a byproduct of a process can become a blueprint for a work.

Mestrom ‘completes’ each work by presenting the collected remnant on a pedestal with a ceramic intervention. Each configuration is a series of discrete formal relationships between form, texture, tone, line and light. These abstract arrangements follow the unique silhouette and irregularly shaped contour of each ‘found’ object—a positive form for each cast-out negative—a home for each scrap.

But beyond these material and formal considerations, and perhaps more importantly, each artwork denotes a relationship between two artists. In this respect, Leftovers is transaction: a request which is (sometimes) followed by an offering. The works—which include the catalogue of letters that helped to form the project—are a sequence of (at times intimate) exchanges between artists, friends, curators and gallerists. These works reveal the sometimes effortless and sometimes fraught connection between things: between a ceramic form and an oddly molded extrusion; between an artist and an art world; between countries, cultures and individuals.

Collectively, Leftovers captures the most significant of Mestrom’s lived art-experiences. The work is a physical trace of the forces which formed and shaped her practice and life. They are an embodiment of her encounters.

They are a self-portrait, of sorts.”